A 7th-grade boy completes a programming course in 5 months 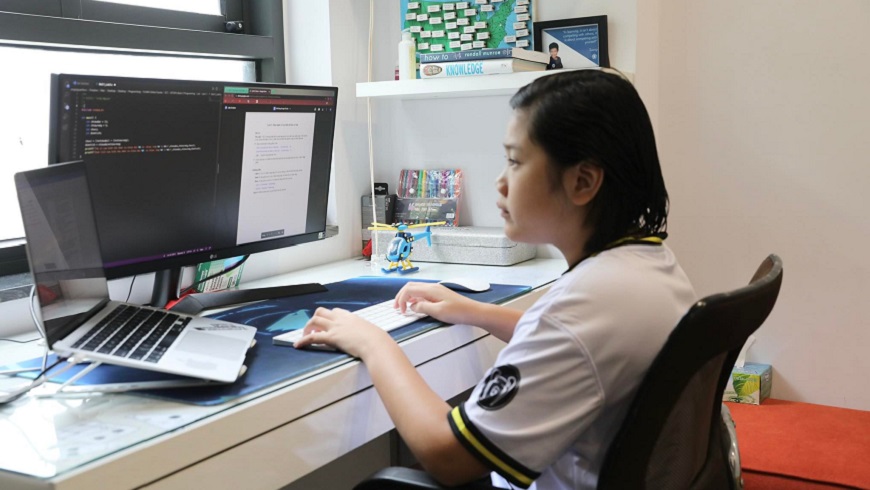 Passionate about technology and programming, a 7th grader, Nguyễn Tường (HCMC), has chosen to learn programming at FUNiX remotely. Tuong has won the Fast Learner Scholarship, a grant of 20% tuition fee when he completed Certificate 1 – Basic Programming in just 5 months – 7 months faster than the FUNiX time limit.

Currently a student at an international school in Ho Chi Minh City, Tuong has experienced many online courses in IT before FUNiX. Tuong has been learning Python since 6th grade and has taken several short-term online programming courses from Harvard University (USA).

“My mother has introduced me to FUNiX, and I decided to pursue it to gain more knowledge and practice in IT. At first, I was a little nervous and scared that I would not be able to do it. However, now, I feel much more relaxed after the first Certificate,” said Tuong.

Every morning, Tuong usually wakes up at 7:00. Instead of playing as a habit, he will take advantage of studying FUNiX before his school starts at 8:40.

“Every day, I encourage myself to study at least one lesson. If I do not finish it in the morning, I will continue after school. I rarely get bored of studying and usually keep learning by planning, setting goals, and performing every day. I usually watch the lecture, read the references and documents sent by the mentors, then do quizzes and assignments to master the knowledge.” – Tuong said.

When facing difficulties, Tuong will connect with a mentor or ask Hannah for support. Ma My Hien Hannah – Tuong’s companion at FUNiX, very patiently follows up to promptly remind and encourage him to continue his studies. Hannah often asks him if he could do the homework, encounters any obstacles while studying, and reminds him of the time for coaching, mentoring, and a very detailed and meticulous exam schedule. That helps Tuong adapt well to learning as well as stay motivated in times of difficulty.

After five months, Tuong completed the Basic Programming Certificate and gained much helpful knowledge: he understood computers and how they work. With the knowledge he learned, he succeeded in programming the first website, editing and adding many exciting features for himself in the game “Space Invaders.”

I like the knowledge in “Getting To Know Your Computer” the most, because I learned many new skills, including important ones on how to use operating systems, programs and security – Tuong shared.

Positive changes after the programming course at FUNiX

Tuong’s mother, Trang Do, said Tuong had had many positive changes since learning at FUNiX. Tuong has more structured and specific IT knowledge. In particular, he was trained in self-studying skills, detailed self-planning, and implemented the plan to get more knowledge. As a student at an international school with a high degree of independence, Tuong often learns by himself, sometimes struggling with difficult lessons. After studying FUNiX, he understood the role of a mentor and knew how to ask for the help of mentors, including Hannah to learn more knowledge.

He loves learning to program online, always eager each time he finishes a lesson, a subject, or a new subject at FUNiX and shows it off to me. There are also times when he “fails,” but he is not discouraged and will try to find out where he is lacking, where  he is wrong to perfect and overcome, commented Ms. Trang Do.

The IT concept is an essential skill in a new era. Mrs. Trang did not wait until he grew up to learn. She thinks that Tuong still has much free time at a young age. Their brains are also flexible and easy to absorb knowledge. In reality, even though Tuong is a 7th-grade student, he meets no knowledge challenges and can completely catch up with the FUNIX course.

Tuong’s mother also did not hide her surprise and had more confidence with FUNiX when she saw the materials from top schools in the world. The different subjects were usually updated with the versions of the newest knowledge, responding quickly, sensitively, and constantly to changes in technology. On the other hand, FUNiX mentors are everywhere: Vietnam, Australia, United States, etc.

My Hien Hannah comments that Tuong is an intelligent and industrious student. He has good critical thinking, is bright, and has outstanding math skills.

Tuong loves and is determined to continue the path of Computer Science. He never stops working hard to learn, persists, and always completes assignments well during the learning process. Especially, even though his Vietnamese skills are limited because Tuong communicates to others in an English environment, but Tuong always chooses to learn the subjects in the Vietnamese version to improve his mother tongue – Hien Hannah adds.

Currently, Tuong has started to obtain the 2nd Certificate – Programming mobile applications. He has said that he will continue maintaining the regular learning and will “try to complete the goals every day” to finish all the seven certificates of FUNiX shortly.