Global Talk on Emerging Technology with Professor from Deakin University 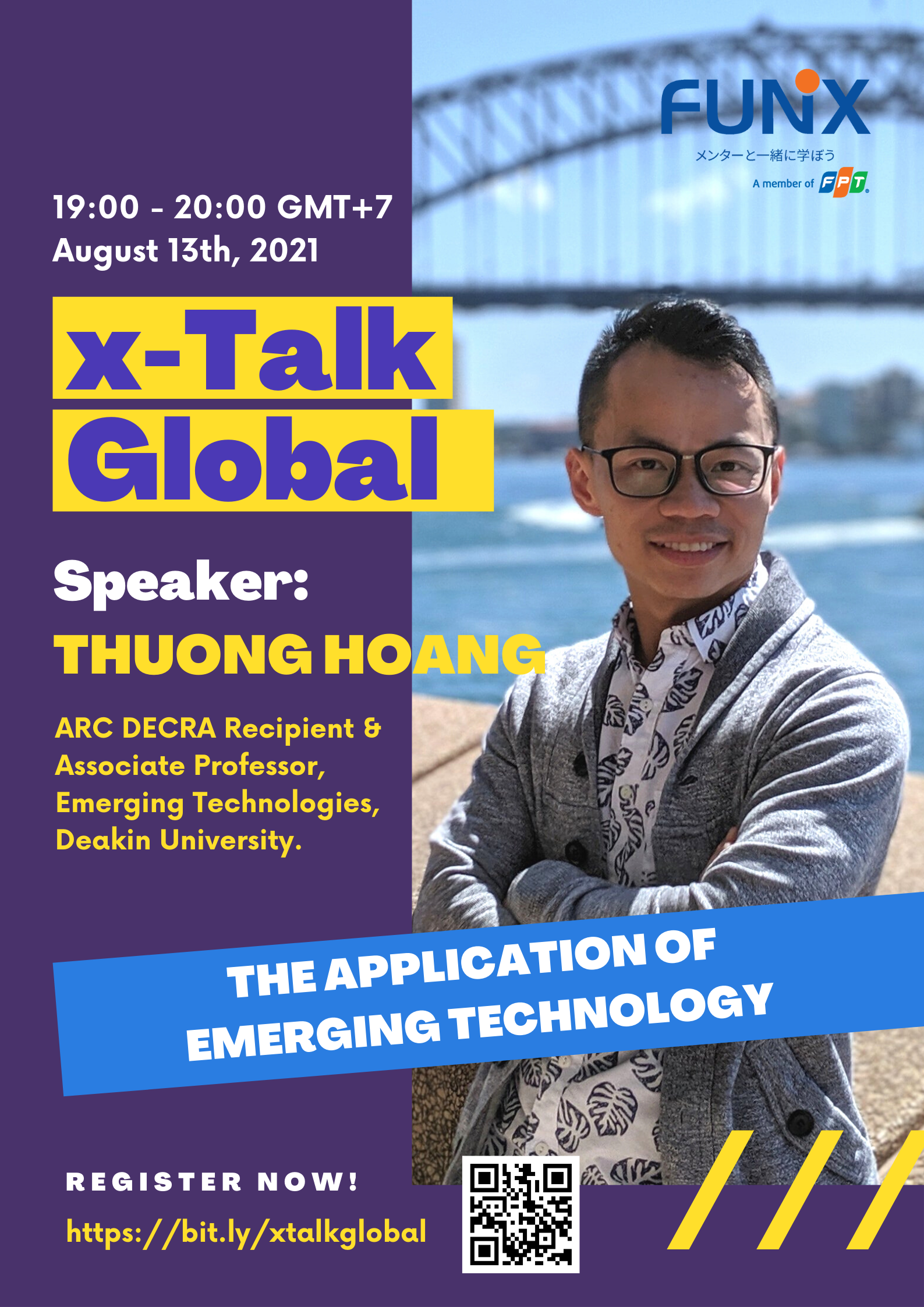 The first Global Talk on a very interesting topic “The Application of Emerging Technology” was held on August 13, 2021, with the participants of more than 30 students from Vietnam and Japan.

The speaker of the event was Assoc. Prof Thuong Hoang from Deakin University, Australia. He started working on VR and AR technology back in 2010 while studying for a PHD. He also shared with FUNiX the reason why he chose to research Emerging Technology with his love of working with leading-edge technologies. In his speech, he introduced various examples about emerging technology and mainly focused on his professional field; Virtual Reality.

Although emerging technology is a very broad field, the speaker systematized it in a very understandable way, by providing easy-to-understand illustrated videos. inFROM, a dynamic shape display that renders 3D contents physically was one of the examples. This display was made in the Tangible Media Group in MIT Media Lab, allowing users to do physical actions in the digital world. There were other interesting examples such as connected home, fitness band, wearable bands, and robotics. He also mentioned about the future jobs, that the range of career is large and encouraging.

Mr. Thuong explained in more detail about Virtual Reality (for short, VR) where he is studying as a professor. “VR is a computer-generated graphical simulation providing new kinds of experience, enabling users to interact with objects and navigate in 3D space,” Mr. Thuong explained. With the definition of VR, he also provided examples. Using a holoportation, a new type of 3D capture technology, people can meet their family members far away in real-time. IKEA also introduced a reality app. Using a smartphone, people can scam patterns in a particular catalog or view how furniture is placed virtually. Mr. Thuong mentioned the past activities at FPT University, the Quiver, an augmented reality coloring app. Additionally, he explained about his work, One body Martial Arts Training. It is a virtual reality training system that helps the learner to understand the correct body movements with a visual movement of the instructor’s avatar. With various visual sources and explanations, Mr. Thuong raised the interest of participants about VR.

Answering student’s questions about whether how hard is it to convert Vietnamese voices to text, Mr. Thuong Hoang said that processing natural language into a computer is not the biggest problem in computer science at the moment. Giving his own experiences with using google home Inc, he explains that the computer can pick up people’s voices very effectively and clearly. However, he mentioned that the challenging point would be ‘translating’ because the syntax of the language is a lot complicated.

Also, for the question related to his personal opinion about the updating trend of computer science, he mentioned “Human-in-the-loop”. He refers that HITL as a combination of human interaction and AI. Usually, computers can calculate math problems faster and more accurately than a human. But in some areas, human deals with things much better. By using HITL, people can accomplish things that humans or computers can’t do on their own, improve productivity, and make better results. Mr. Thuong Hoang concluded his answer that this system is attracting global attention and will develop further in the future.

The Global Talk is an international talk event, with interesting topics. It is open to anyone who wants to interact with international speakers and learn the latest knowledge of the specific field. Also, in the event students can make international friends and improve their English skills. The event holds in every Friday night, from 19:00 to 20:00 in Vietnamese time.

Record of the event:

What is emerging technology?

FUNiX new cooperation with the City University of Seattle, the USA