HOW TO DEVELOP IN “TECHNOLOGY REVOLUTION” 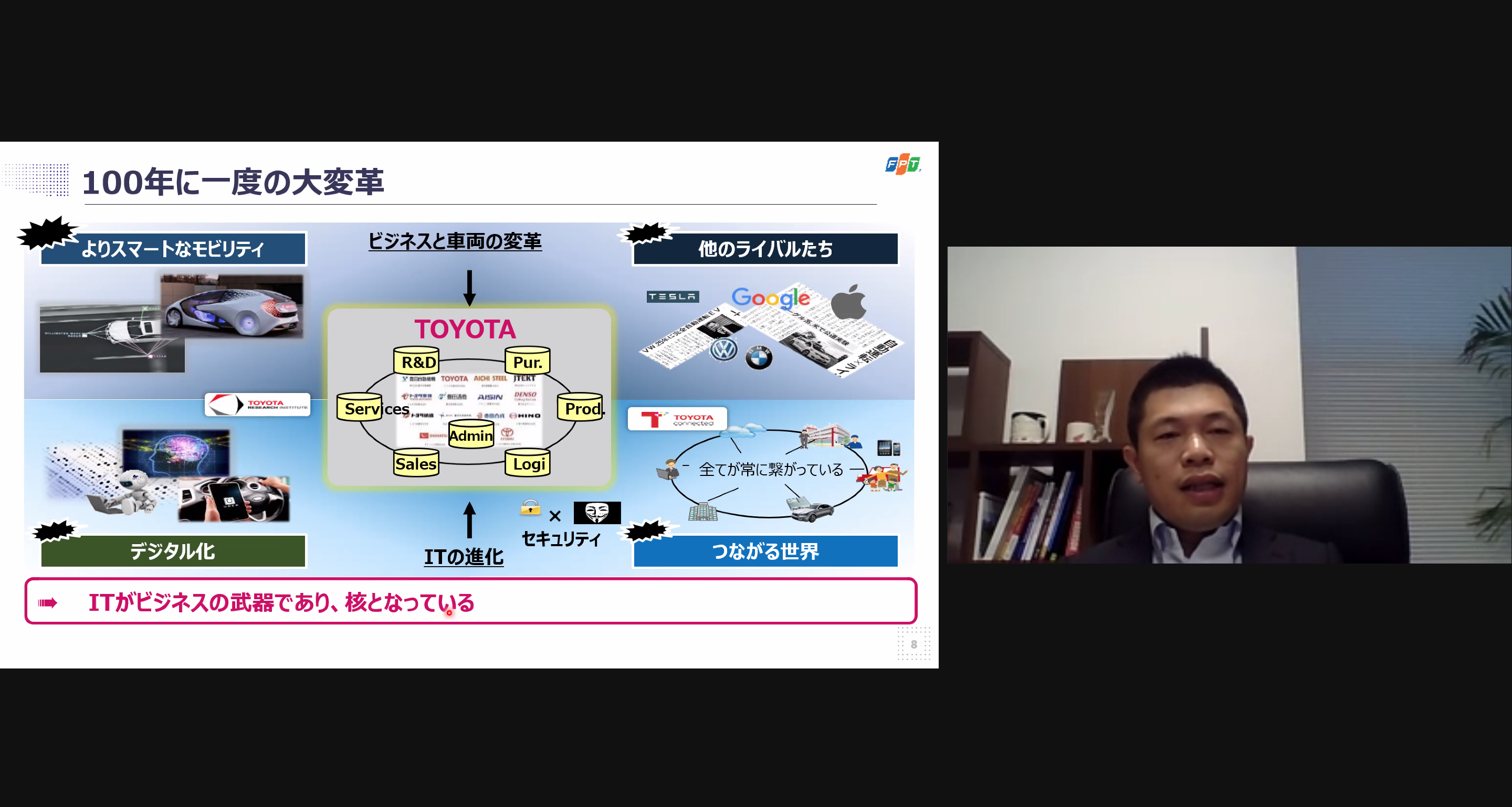 Businesses cannot grow without software. That is the share of FPT Software’s Senior Vice President, Mr. Nguyen Duc Kinh in the 2nd “Industry Lecture”, organized by FUNiX Japan with the theme “Surviving and developing in the era of the “hundred-year-old revolution”.

Once in a hundred years Technological Revolution

Mr. Nguyen Duc Kinh is currently Senior Vice President of FPT Software, who is in charge of Global Automotive & Manufacturing. In the last Industry Lecture, he brought interesting sharing about the challenges that automotive manufacturers are facing, the trend of “connecting” in the automotive industry, as well as the skills that students need to have to thrive in this revolution.

Affirming that the whole world is entering a “great revolution that happens once every hundred years”, Mr. Nguyen Duc Kinh mentioned many technological challenges that businesses – including FPT’s customers in Japan are encountering.

According to the Vice President, traditional automotive manufacturing companies are facing a lot of problems and challenges. The first thing is the trend of Smart Mobility – self-driving cars, cars connected with cars, or social networks infrastructure,… via Cloud Computing. The second is Digitization. In the past, car manufacturing companies focused on engines, transmissions, even the design was drawn on paper… However, the analog world is gradually moving to digitization such as mechanical design, simulation, analysis are also moving to digitization and automation. And in addition, there is a challenge from “other competitors” such as technology companies like Google, Tesla, Apple …, which have never produced cars but recently suddenly entered this market.

Regarding the necessity of software in the automotive industry, Mr. Kinh believes that IoT is a “fertile ground” for the job market in Asia in the coming time: “Japan is still short of 70,000 engineers and technicians. This is mentioned a lot. The world’s leading technology companies have only appeared in the US such as: Microsoft, Amazon, Facebook, Apple. China recently has Baidu, Alibaba, and Tencent. Meanwhile, there are none of Japanese and Southeast Asia Tech companies present in the top list. So I think, from now on, there will be opportunities for Asian companies.”

FPT Software Vice President cited the case of Toyota. The company set the slogan “Software First”, which means that software is the decisive part, the most important part of its development. Cars will not simply be a car that knows how to run, stop and turn, but like a “connected city”. According to Toyota’s strategy, by 2022, the company’s organizational structure will be divided into the Software and Hardware segments. It is believed to help shorten the product update circle, regularly adding new functions, new experiences …. for users.

Related to technical issues, Mr. Kinh said that a car will have up to 80 – 100 mini computers operating inside, controlling the body of the car, entertainment system, vehicle navigation system, safe driving, etc. … A car has up to 100 million lines of code, 7 times more than a Boeing 787 – the most advanced Dreamliner. In addition, the software is not only concentrated in one car, but also has software for social platforms, cloud services to connect with cars.

As can be seen, the car is also an Internet of Things (IoT) device. The data from inside and outside the car… is uploaded to the cloud, analyzed by AI, providing convenient services back to users or businesses.

In order to not only survive but also take advantage of opportunities in this revolution, Mr. Nguyen Duc Kinh gave suggestions on the technologies and skills that young people need to equip. According to him, IoT is a tool, not a purpose. “Once you have a positive mindset about software, you will find your own way to learn it. And let’s study diligently. On online learning platforms, there are also many courses for you such as Coursera, Udemy, FUNiX …. Nowadays, everything has become very convenient, the rest just depends on your spirit of determination. I believe all of you can do it.”

“For future career development, to be able to survive by IoT, programming languages like C, C++, embedded software… are indispensable things.” Along with that, the speaker gave the necessary skills for cloud engineers and autonomous vehicle development such as: UI in cars, programming skills C, C ++, Python. He also advises young people who want to enter the industry to be proficient in the use of AI frameworks, skills needed for vehicle development, IoT development and data analysis.

“In the Software First era, without software, businesses cannot evolve. Therefore, from now on, let’s learn a lot about software. We can survive and develop with software in this era” – speaker Nguyen Duc Kinh once again emphasized.

Building adaptability for students by IT training